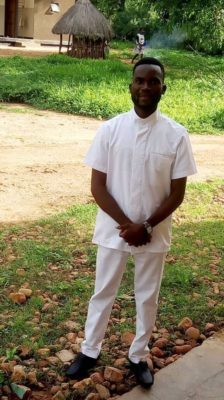 Vincent is the eldest son born from a family of seven children (2 brothers, 4 sisters). He was raised by a single mother together with his siblings after his father passed away when he was still young. His mother earned the family’s living through small scale farming, but only grew enough for the family’s consumption which in some instances, was not sufficient to last the whole year.

Vincent completed his secondary school education in 2014 and is happy to say that with the help of ZOA-Z, he was admitted to college in 2017 to train as a Registered Mental Health Nurse at Levy Mwanawasa Medical University where he graduated with a diploma in 2020.

“I would like to express my sincere gratitude for making my tertiary education possible with the financial assistance which came through at the right time when I had even lost hope.”

Vincent is currently working as a volunteer at Katondwe Mission hospital to hone his skills as he awaits to be deployed by the government. He has a bright vision for the future as he says:

“Being the firstborn from the family of 7 and the only one to complete school, I am looking forward to create opportunities for my siblings and fellow orphans even with those who have stopped school due to financial bottlenecks so that I give something back to others the same way that I have received this rare and precious support by ZOA-Z”.

Vincentwishes to thank the St. Peter Claver Society for coming through for him in his hour of need by funding his tertiary education via its sister organization ZOA-Z which is on the ground in Zambia. He truly is grateful to have his degree in nursing.